Home Foreign News What wildfires in Brazil, Siberia, and the US West have in common
Facebook
Twitter
WhatsApp 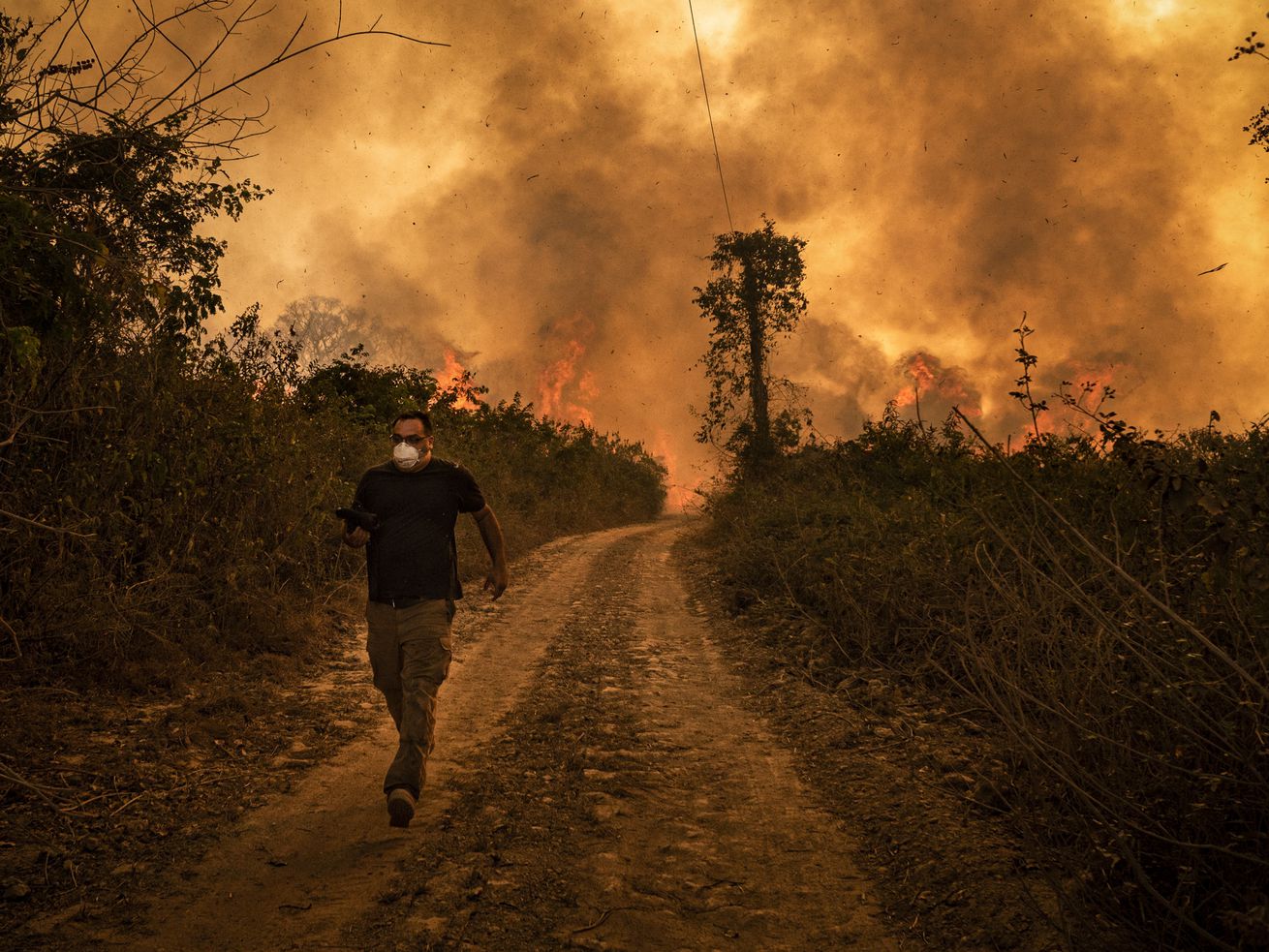 This summer, record forest fires are burning in Brazil’s Pantanal region. According to experts, Brazil has topped the charts for fire hot spots globally. | Gustavo Basso/NurPhoto via Getty Images

Climate change and mismanagement are fueling large, uncontrolled fires around the world.

The West Coast of the United States is still deep in the throes of an epic wildfire season, with California officials warning that the record area of 3.1 million acres burned in the state so far this year is likely to keep growing.

“With no significant precipitation in sight, California remains dry and ripe for wildfires,” the California Department of Forestry and Fire Protection (CAL FIRE) said in a statement on Wednesday. Oregon and Washington, meanwhile, are also still battling dozens of fires, with air quality hazardous in many communities, including the Portland metro area.

These regions have not been alone in facing raging fires this year. Australia’s record-shattering summer of bushfires bled into January and February. And then, following an unusually warm spring, wildfires lit up the Arctic Circle region starting in May.

In Brazil, massive fires have erupted in the Pantanal wetlands and in the Amazon rainforest. In fact, this year’s Amazon fires are expected to be even larger than the notorious ones of 2019, a Brazilian government researcher told Reuters.

With Covid-19 compounding the health threat of wildfire smoke, this year’s fires are putting an unprecedented strain on communities. But scientists say we should expect bigger, more deadly, and more destructive fires like the ones we’ve seen in 2020 in the years to come.

“Overall, there is general agreement amongst the studies that the frequency or severity of fire weather, fire-season length, burned area and fire occurrence are increasing with future climate change,” researchers wrote in an article published in Nature Reviews Earth & Environment in August.

The recent fires resulted from a combination of local and global factors, but human mismanagement — from climate change to deforestation to neglecting controlled burns — is the backdrop of each crisis. They remind us of the urgency of stopping greenhouse gas emissions to limit climate-fueled disasters and chaos in the future.

Why Brazil is burning again

While the fires in California, Oregon, and Washington have been dominating US headlines, Brazil has actually topped the charts for fire hot spots globally. In almost every day in September so far, Brazil has had twice the number of hot spots as the US, according to the Greenpeace Global Fire Dashboard, which identifies fire activity using NASA satellite data. If a pixel of the satellite image, which covers 1 square kilometer, contains fire, it is labeled a hot spot.

A government researcher told Reuters he expects 2020 will mark the worst August of fires since 2010.

As with 2019, researchers have linked this year’s fires to massive illegal deforestation. Under Brazilian President Jair Bolsonaro’s administration, ranchers, farmers, and miners have been given much freer rein to clear the rich rainforest for commercial activity, and setting fires is a cheap way to do that.

“The fires we see now, which will be record-breaking and the worst in 10 years, are the result of a deliberate strategy of environmental rollbacks and impunity for people who are behind the illegal fires,” said Daniel Brindis, forests campaign director at Greenpeace.

Last year’s illegal fires were met with outcry from the international community, including French President Emanuel Macron, UN Secretary-General Antonio Guterres, and a domestic coalition of opposition politicians and indigenous organizers. Some international investors have also taken action: Norway’s Nordea Asset Management divested its holdings from Brazilian meatpacking giant JBS SA this summer over reports that its supply chain was contributing to deforestation.

However, according to Brindis, “The pressure has not met the threat in terms of magnitude.” In other words, the large-scale burning this summer shows that these campaigns have yet to effectively prevent deforestation or the subsequent uncontrolled wildfires in Brazil. In July, the Bolsonaro administration announced a 120-day ban on fires in the Amazon and Pantanal, a region in southwestern Brazil that’s home to the world’s largest wetlands — but experts told the New York Times that it hasn’t been strictly enforced.

Record fires in the Pantanal region this summer are also linked to illegal land-clearing for agriculture, which doubled in the first half of the year, Federal University of Mato Grosso ecologist Leticia Couto Garcia told Unearthed.

Along with deforestation, climate change also plays a role in increasing fire risk in the Amazon and Pantanal. The frequency of high fire weather days in the Amazon increased above natural variability starting in 1997, according to a 2018 study published in Geophysical Research Letters.

Drought in the Pantanal and other parts of Brazil in 2020 has made the region drier, fueling the fires. Due to climate change, the wetland will experience more frequent periods of extended drought in the future, according to a 2020 study published in PLOS One.

Patterns similar to those in the Amazon and Pantanal have also played out in Indonesia in recent years. During the country’s dry season in 2019, nearly 4 million acres of peatland and tropical forest were burned. Like in Brazil, slashing and burning is an easy way for farmers to clear land, in this case for the palm oil and paper industries. Indonesia hasn’t had a pronounced dry season in 2020, so the number of fires has remained low — but the season isn’t typically over until October.

Climate change is fueling fires from Siberia to the West Coast

Deforestation has not played the same leading role in the fires spanning the western US and Siberia this summer, but climate change has primed both landscapes to burn.

Over the past two years, the Arctic has had record fire seasons. A Russian Academy of Sciences researcher told Nature almost 20,000 fires across 35 million acres of land — mostly permafrost — burned in eastern Russia this summer.

Like the California fires, which cast an orange hue over the San Francisco Bay Area, the Arctic fires have had a sci-fi quality.

So-called “zombie fires” may be burning in Arctic peatlands, where approximately half of this summer’s fires have occurred. Peat soils, the result of up to thousands of years of decomposing organic matter, are a very carbon-dense fuel, and some researchers believe the fires can smolder beneath the frozen surface in the winter months before reappearing — like zombies — in the summer, Nature reported.

2020’s Arctic fires were ignited early in the rapidly warming region due to an unusually temperate spring followed by a summer heat wave, which helped dry out soils.

Recent research shows that the Arctic peatlands will flip from being carbon sinks to carbon sources as the region heats up further.

Climate change has also been a force behind the latest wave of destructive wildfires on the West Coast. Rising temperatures have dried out the West’s forests, making them more vulnerable to fire.

Since the 1980s, fall weather has made California increasingly prone to fire. A study recently published in Environmental Research Letters showed that fall days with fire weather have doubled because of climate change.

With fires burning in so many disparate corners of the world, one might assume that wildfires have been growing every year. However, a 2017 study in Science showed the amount of land burned yearly actually decreased by 25 percent in the preceding two decades. This is largely due to land use changes, namely the conversion of more fire-prone savannah in Central Africa to agricultural land, Swansea University wildfire researcher Cristina Santin Nuno told Carbon Brief.

But fire risk is indeed increasing due to climate change, according to a 2020 review of the scientific literature on ScienceBrief, a website run by scientists who review evidence on critical topics. “Human-induced warming has already led to a global increase in the frequency and severity of fire weather, increasing the risks of wildfire,” the authors concluded.

Just how much fires increase in the future, or whether they do at all despite the rise in risk, depends on how policymakers and citizens respond to the threat.

If governments do not take action to control greenhouse gases and deforestation, a vicious cycle will ensue where fires may lead to more fires. As landscapes burn and release carbon dioxide, it helps trap more heat in the atmosphere. In the past, carbon dioxide from fires would be reabsorbed when plants regrew in subsequent years, but 2019’s fire emissions rose, potentially destabilizing that balance. Valuable “carbon sinks” are lost when ecosystems burn, sometimes irrecoverably — as in the case of Arctic peatlands, which have built up over millennia.

On the other hand, if global emissions drop, deforestation decreases, and better fire management practices are applied locally, fires may not increase as much.

“If we are able to keep the amount of warming to no more than 2°C above pre-industrial levels, we dramatically reduce the area that sees an emergence in this fire weather index compared to if we warm by 3°C,” John Abatzoglou, a scientist at the University of California Merced whose research has shown how climate change increases fire weather, told Vox.

Improving fire management practices is also critical, Abatzoglou said. Indigenous people in North America have historically practiced prescribed burning, which is now more broadly recognized as an effective way to reduce the risk of uncontrolled fires. Across global fire zones, “One common thread is that Indigenous stewardship is something that we can learn from,” said Greenpeace’s Brindis.

While these preventative measures are important, the threat of climate change still looms large, Abatzoglou said. “We are really sort of stacking the deck for more fire in the future,” he said, “due to the confluence of warming and drying conditions and this legacy of fire suppression and the exclusion of indigenous practices on the land.”

Lili Pike is a science, health, and environmental reporting (SHERP) master’s student at NYU and a freelance journalist with a focus on China.

Help keep Vox free for all

Millions turn to Vox each month to understand what’s happening in the news, from the coronavirus crisis to a racial reckoning to what is, quite possibly, the most consequential presidential election of our lifetimes. Our mission has never been more vital than it is in this moment: to empower you through understanding. But our distinctive brand of explanatory journalism takes resources. Even when the economy and the news advertising market recovers, your support will be a critical part of sustaining our resource-intensive work. If you have already contributed, thank you. If you haven’t, please consider helping everyone make sense of an increasingly chaotic world: Contribute today from as little as $3.

Over 1,000 Taking Part In Protest March Of Pensioners In Minsk